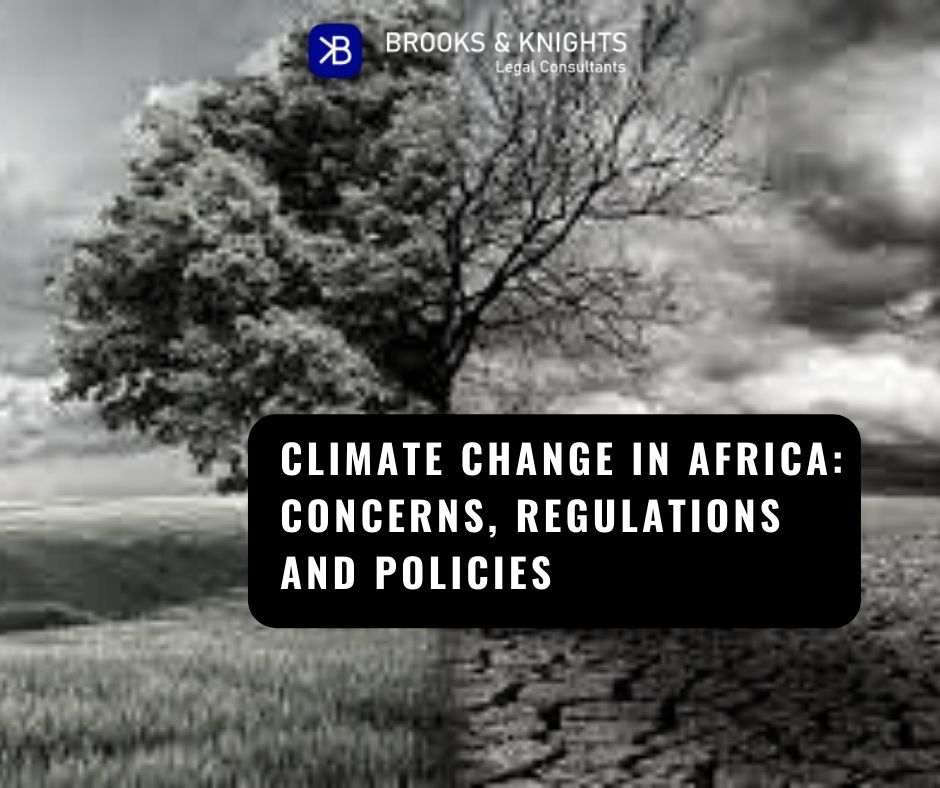 Climate change has resulted in severe weather events across the world such as increased temperatures, rising sea levels, more frequent and intense droughts, storms, heat waves, and melting glaciers up to degrees not previously experienced. Africa, however, is in a precarious position being the continent most vulnerable to the impacts of climate change. At the 26th session of the Conference of Parties (COP26) held in Glasgow, Scotland in 2021, world leaders agreed to reduce greenhouse gas emissions by 2030 to well below 20C above pre-industrial levels while pursuing efforts to limit it to 1.50C. Achieving this objective will require governments in all countries to address the impacts of climate change through the enactment of robust policies and legislation. This article examines the progress made by select countries on the continent (Ghana, South Africa, Algeria, Kenya, Nigeria) in respect of climate change policies and regulations with a view to pointing out that the enactment of comprehensive legislations on climate change is the foundation of effective adaptation and mitigation mechanisms.

Ghana is a country in West Africa with a population of approximately 31 million people. It is regarded as the second largest producer of gold in Africa. In 2019, 34% of the energy generated in Ghana was from renewable energy sources with an estimated 79.3% of the population having access to electricity. In Africa, Ghana is ranked as having one of the highest rates of access to electricity.[1] With respect to carbon emissions, Ghana releases 0.54 metric tons of co2 emissions per capita into the atmosphere and ranks amongst the countries with the lowest carbon emissions in Sub-Saharan Africa.[2]

Ghana, which ratified the United Framework Convention on Climate (UNFCCC) in 1995 and in 2010, published “Ghana Goes for Green Growth: National Engagement on Climate Change” does not have a comprehensive climate change legislation. However, the country has piecemeal laws, regulations and policies across various sectors which reference sustainable development. This document paved the way for the adoption of the National Climate Change Policy (NCCP) which was approved by the country’s parliament in 2013. The NCCP is regarded as Ghana’s integrated response to the challenges of climate change within its socio-economic context.

The NCCP outlines Ghana’s vision and objectives with respect to effective adaptation, social development and mitigation with the aim of ensuring “a climate resilient and climate-compatible economy.” It also aims to achieve sustainable development and equitable low-carbon economic growth for Ghana while proposing to integrate traditional knowledge with the current and emerging knowledge to tackle climate change in the country. The NCCP outlines five priority areas to improve: agriculture and food security; disaster preparedness and response; natural resource management; equitable social development; and energy, industrial and infrastructural development.

With respect to agriculture, Ghana has the National Climate Smart Agriculture and Food Security Action Plan (2016 – 2020) (also known as the CSA Action Plan) and the Investment Framework for Mobilisation of Resources into Climate Smart Agriculture in Ghana (also known as the CSA Investment Framework). Other legislation and policies provide for sustainability and include the Renewable Energy Act, 2011, Energy Commission Act, 1997, National Climate Change Adaptation Strategy, and the National Energy Policy. While the country envisages an increase in the demand for energy in the coming decade, the country also plans to increase the percentage of renewable energy in its energy mix as well as reduce its use of petroleum products.

[1] Sustainable Energy for All. 2022.Ghana: At a Glance. Retrieved from https://www.se4all-africa.org/seforall-in-africa/country-data/ghana/