Revamping the Arbitration Process in Nigeria in Ensuring Speedy Resolution of Commercial Disputes: A Consideration of the Case of Mekwunye v. Imoukhuede 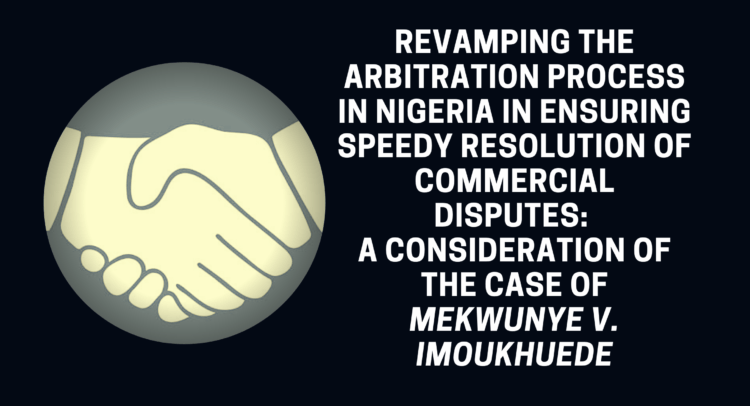 Revamping the Arbitration Process in  Nigeria in Ensuring Speedy Resolution of Commercial Disputes: A Consideration of the Case of Mekwunye v. Imoukhuede

As global trade continues to plummet due to the disruption of economic activities occasioned by the COVID-19 pandemic (“COVID-19” or the “pandemic”), the International Monetary Fund (“IMF” or the “Fund”) foresees the world facing its worst recession since the great depression of the 1930s.[1] Thus, to foster global growth and economic stability, the Fund has offered emergency support to some of its member nations to cushion the effect of the acute economic impact of the pandemic. In order to support Nigeria’s actual balance of payment needs induced by the sharp fall in international oil prices, IMF recently approved the sum of $3.4 Billion for Nigeria’s emergency funding.[2]

Although, oil remains Nigeria’s major foreign exchange earner and hence, the basis for the IMF funding, the current economic instability and reduction in Nigeria’s gross domestic product (“GDP”) is partly caused by the extreme economic challenges confronting businesses as a result of the pandemic and measures implemented to combat same.  The National Bureau of Statistics pegs the contribution of small and medium scale enterprises (“SMEs”) in Nigeria to the GDP at 48% in the last five years.[3] In fact, the World Bank posits that SMEs represent about 90% of businesses and account for 50% of employment globally.[4] Accordingly, the importance of SMEs to the Nigerian economy cannot be overemphasized and as such, plausible recovery plans must be implemented to address the harsh impacts of the pandemic.

One of the impacts of the pandemic on SMEs is the inability to meet contractual obligations which may likely result in invoking force majeure clauses, relying on the common law doctrine of frustration in the absence of force majeure clauses in contracts or simply terminating such contracts. While the pandemic may, indeed, qualify as a supervening event, determining the correctness of discharging an obligation under a contract on that basis may require judicial intervention. Thus, there is a looming threat of breach of contract litigation for businesses, post-COVID 19, for the determination of claims for damages. Litigation is one of the roadblocks SMEs must contend with as an aftermath of the pandemic and their business recovery plans must accommodate the utilization of the best procedure – in terms of effective time and cost management – in resolving such disputes.

For effective time and cost management, arbitration is usually considered a preferred mode of resolving commercial disputes. In addition to the fact that it may preserve the business relationship of the disputing parties, it saves the time of the parties and reduces the cost that may be incurred in a protracted litigation. Consequently, invoking arbitration clauses in commercial agreements or executing submission agreements in the absence of an arbitration clause would aid the recovery of SMEs after the pandemic and limit the adverse effects such disputes may have on businesses in terms of cost and time wastage.

However, while arbitration is a fast-paced process in principle, its implementation as a post-COVID 19 business recovery plan for SMEs in Nigeria may be inhibited by judicial intervention as recently experienced in the case of Mekwunye v. Imoukhuede.[5] There is therefore a need to urgently revamp the arbitration process in Nigeria, particularly as it relates to the intervention of courts, with a view to preserving its attraction as a time and cost saving alternative dispute resolution mechanism. The first section of the article briefly considers the arbitration process with a view to highlighting its time and cost saving benefits. The second section reviews the case of Mekwunye v. Imoukhuede and explains how judicial intervention retards the time and cost saving benefits of arbitration. The conclusion proffers pragmatic measures that can be implemented to preserve the concept of arbitration in its pristine form as being a time-effective and cost-effective process.

The maximization of profit is the hallmark of businesses[6] and disputes are probable incidences of commercial transactions. Thus, the maximization of profit, when considered from the prism of dispute resolution, would entail the adoption of a time effective procedure geared towards saving cost associated with a prolonged adjudicatory process like litigation. Arbitration offers such effective time management and it can only be utilised upon the agreement of parties in writing.[7]

The written agreement of parties to submit to arbitration is a decision the law considers important as parties are precluded from reneging on it except with leave of court or the subsequent agreement of parties to rescind it.[8] In fact, while an arbitration agreement cannot oust the jurisdiction of courts,[9] courts are enjoined to give effect to the agreement of parties. Hence, where a party to a contract that contains an arbitration clause rushes to court without first opting to resolve the dispute through arbitration, the other party may, before taking other steps in the proceedings, apply to the court to stay proceedings pending the determination of the dispute through arbitration. The courts are usually not reluctant to stay proceedings pending the determination of arbitration which, on the average, only takes about 3 months to conclude.

Upon the conclusion of arbitration and the delivery of an award, if the unsuccessful party does not willingly comply with the award, the successful party may approach the court for the enforcement of the award. However, the unsuccessful party may in deserving cases challenge the award in court. Judicial attitude, in recent times, in upholding unnecessary technical challenges to arbitration awards (with the attendant effect of either jettisoning such awards or extending their time of enforcement upon reversal of such decisions by a higher court) has impeded the efficacy of arbitration as an expeditious dispute resolution process. In Mekwunye v. Imoukhuede, it took about 12 years to uphold an award as a result of undue reliance on technicalities.

Despite the fact that the Supreme Court corrected the negative perception that greeted the decision of the Court of Appeal, it took 12 years from the time the award was made in 2007 for the Supreme Court to affirm the award in 2019. The post-arbitration process in the case of Mekwunye v. Imoukhuede failed to satisfy the desired time-management result generally attributable to arbitrations. The parties must have (in addition to the cost of arbitration) expended a lot in prosecuting the dispute at the trial court, Court of Appeal and the Supreme Court. Though the Supreme Court has played its part in emphasising the need to refrain from attaching importance to technicalities in arbitration, the process leading up to the decision cost the parties, particularly the appellant, who only benefitted from the award after 12 years. There is therefore a need to revamp the arbitration process and its challenge mechanism in ensuring the speedy resolution of disputes and the maximization of profit for SMEs and businesses generally.