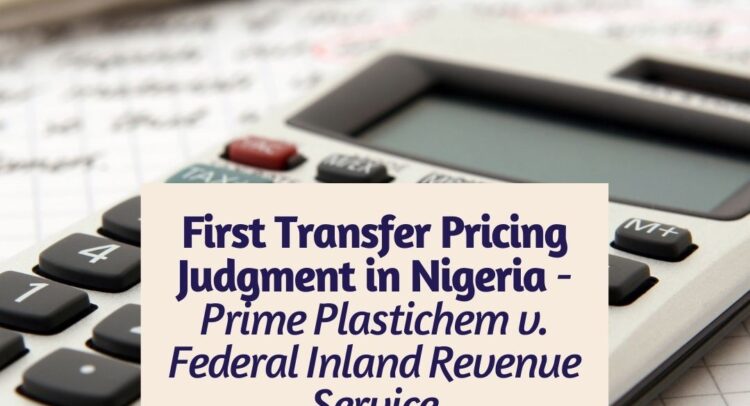 Following the commencement of the TP Regulations, Prime Plastichem, a private limited company engaged in the business of trading in imported plastics and petrochemicals, filed its TP Documentation for its 2013 and 2014 financial years (FY) in respect of transactions with its related supplier, Vinmar Overseas Limited (VOL). For its 2013 FY, Prime Plastichem adopted the Comparable Uncontrolled Price (CUP) Transfer Pricing method[1] in determining whether the pricing of its transactions with VOL meets the arm’s length principle requirement prescribed by the TP Regulations. In 2014 FY, Prime Plastichem adopted the Transactional Net Margin (TNM) method[2] due to inability to find a comparable transaction.

The FIRS reviewed Prime Plastichem’s TP Documentation and concluded that the company’s comparable data for 2013 FY did not meet the comparability requirements of the TP Regulations and the company had therefore wrongly applied the CUP method in determining its arm’s length pricing for the 2013 FY. In determining its arm’s length pricing for the 2014 FY, the FIRS determined that although Prime Plastichem had correctly employed the TNM method, it had incorrectly used its Net Profit Margin instead of its Gross Profit Margin (GPM) as its PLI for the 2014 FY. The FIRS therefore made TP adjustments to the transactions in both FYs and raised an additional assessment of NGN1,738,481,875.33. Prime Plastichem objected to the additional assessment which the FIRS dismissed with its Notice of Refusal to Amend (NORA). Dissatisfied with the decision of the FIRS, Prime Plastichem filed an appeal at the Tribunal challenging the imposition of the additional assessments and demand notices issued by the FIRS.

Prime Plastichem submitted five issues to the Tribunal for determination. It appealed to the Tribunal to determine whether the FIRS’s actions in benchmarking the its TP transaction with the TNM methods and using the GPM for the 2013 and 2014 FYs was valid and in accordance with the TP Regulations and the Organization for Economic and Development/United Nations Transfer Pricing Guidelines 2010 (OECD and UN Guidelines). It also sought the Tribunal’s determination on whether the FIRS was correct in its imposition of penalty and interests and whether the Decision Review Panel (DRP) purportedly set up by the FIRS was in accordance with the TP Regulations.

Prime Plastichem’s Arguments – Prime Plastichem submitted that it had duly filed its TP Documentation which reflected the company’s adoption of the CUP and TNM methods for its 2013 and 2014 FYs transfer pricing assessments respectively with the FIRS and that the FIRS had responded by affirming the company’s adoption of the CUP method as the appropriate transfer pricing methodology for the 2013 FY. The company therefore argued that its adoption of the CUP method was in accordance with the provisions of paragraph 5(3) of the TP Regulations. The company also explained that it opted for the TNM method for its 2014 FY assessment due to a lack of comparative data upon which to base a CUP assessment, (as VOL did not transact with third parties in Nigeria in that year). The company therefore argued that the FIRS’ attempt to apply the TNM method to the company’s 2013 FY was incorrect and not in accordance with the provisions of the TP Regulations.

Prime Plastichem also argued that the FIRS’ use of GPM as PLI was unsupported by the TP Regulations and the OECD and UN Guidelines. It further stated that the FIRS, in establishing the DRP, was legally obligated to inform the company about its establishment. It contended that it was deprived of its right to fair hearing as it was neither informed of the establishment of the DRP nor present when the dispute was being considered.